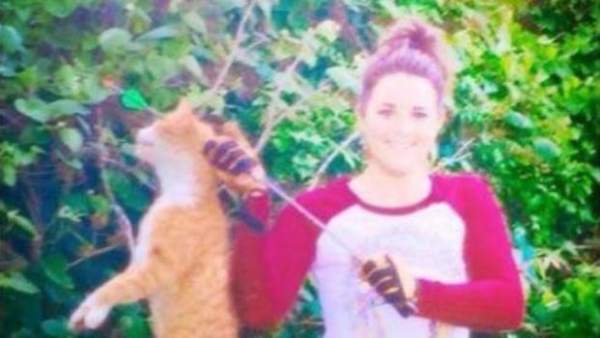 Kristen Lindsey, holding dead cat after she killed it with a bow and arrow. (Facebook)

Animal Legal Defense Fund (ALDF), a nonprofit organization consisting of lawyers dedicated to defending animal rights across the nation, has released a statement about the Veterinarian, Kristen Lindsey. They also opened a petition to re-open the criminal case against Kristen Lindsey.

In June 2015, Kristen Lindsey was charged with animal cruelty after a picture surfaced of her online killing a cat. The court ruled there was insufficient evidence to charge her with animal cruelty due to lack of evidence proving the event occurred on her property. News of this spread, many people were outraged.

There has been a legal battle over her Veterinarian license as well. The justice for tiger page on facebook claims:

Kristen Lindsey’s license has NOT YET been revoked. The TBVME enforcement committee VOTED for revocation, but KL REJECTED THE ORDER. This means that the case will proceed to a state hearing (SOAH) to be heard by an administrative law judge. The process will take several months to complete, and KL’s license will remain active until the case is resolved.

The American Veterinarian Medical Association (AVMA) was was not pleased with lawyer Travis Koehn for defending the use of a bow to kill a cat. “Use of a bow and arrow is not addressed when discussing recommended approaches for the euthanasia of cats,” the AVMA stated.

As Lindsey waits for her court date, ALDF gathered evidence in an affidavit Kristen had signed to appeal the revocation of her license. She had admitted she had killed the cat on her property on the document stating, “The shooting of the feral cat which is the subject of the TBVME’s charges occurred on my property which is in a rural area.” With this evidence, ALDF is able to have the court re-open the case to prosecute her with charges for animal cruelty.

As of December 5th, ALDF petition to get Lindsey prosecuted had reached their goal of over 5000 signatures encouraging Lindsey’s Texas District Attorney to re-open the case in hoping this will serve justice for the deceased cat many had been waiting for. Click here to view and sign Petition