Original article by Douglas Ernst of The Washington Times.

“The Eric Sheppard challenge” #ericsheppardchallenge has been adopted by online activists to honor Valdosta State student Eric Sheppard after he allegedly brought a gun to local protests. One of the protests gained national attention when Air Force veteran Michelle Manhart was detained for grabbing one of the American flags.

Erika Walker was caught on a now-viral video dancing on the U.S. flag while yelling “F*** your flag,” education watchdog Campus Reform reported. 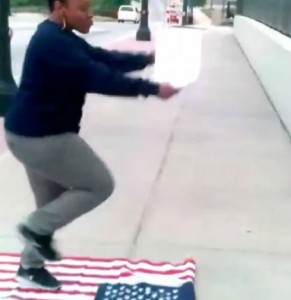 Numerous photos of other participants have been posted on Facebook, The Blaze reported Friday.

Mr. Sheppard disappeared last week when a gun was found in his unattended backpack on campus. He self-identifies as a terrorist against white people, The Washington Post reported.

Mr. Sheppard’s father has pleaded with the student to turn himself in to police.

“Son, you know we love you and have always taught you to do the right thing and make wise decisions. Please make the right decision and turn yourself in, either to the authorities or to me, and we will handle this together,” Eric Sheppard Sr. said in a statement to a local paper.

She should lose her welfare for committing an act like that!

Erica Walker, Eric Sheppard, anyone else who participates in this, your all fucking worthless piece of shit scumbags. Bet you dont mind cashing your da MN welfare checks! If you take part in this you should get a noose around your neck and hang.