Prissy Holly, a former Army Captain turned journalist, has been banned from Facebook for posting a picture comparing the San Bernardino shooter, Tashfeen Malik, to a goat. The photo was on her personal page, where she should be able to exercise her freedom of speech. As a journalist for News Foxes, Prissy Holly has become an outspoken voice and leader among conservatives. Sounds almost ridiculous, to cut a veteran off from using the rights she fought to protect for Americans. 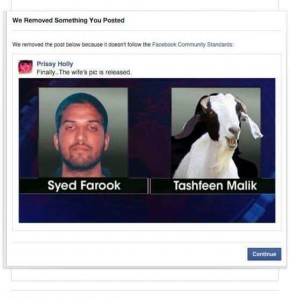 Prissy Holly, was a Platoon Leader for an Infantry unit while deployed to Iraq. She was in control of the internment facility at Camp Bucca, and oversaw some of the worst terrorists prisons while she served. She led with courage, valor, and the heart of a soldier. And then, our veterans get to come home to this kind of treatment for their sacrifice.

Facebook’s Community Standards can’t seem to make up their minds. Talk about the constitution? BAN. Defend Americans against racism or bigotry? BAN. Insult terrorists who killed many innocent people? BAN. Criticize Obama or his administration? BAN. Yet, as many of you have seen for yourself, some truly disgusting antics can’t get removed without an army of reports. I’m not sure whose pocket Zuckerberg is in, and with the contradictions in his standards, I doubt he even does. I’m assuming whoever is throwing money his way at the time.

You can wipe your butt with an American flag, threaten to kill white people and cops, buy don’t you dare insult murderers. That’s the Facebook standard.

It becomes more obvious freedom of speech isn’t being welcome here. You can fall in line with what they find acceptable, or you cannot use the site. What better way to keep people silent, with the addiction to social media. It has become a way of life, promoting, and spreading information for so many. But is the price we pay really worth it?

Ok so you know I have sent you an email regarding all the blocking that FB is doing to the INNOCENT people. Is it time to get to work on it now??? I am ready!

When did you send the email? Wait no I think I see it December 3rd right?

With Facebook you have to remember one thing. Their house, their rules. Problem is, they tend to make them up as they go along. It’s a free service, so you get what ya pay for. I just wish there was a decent alternative.

I see what you are saying, the thing I have a problem with is their racial discrimination. I’ve personally reported people for child pornography and they said it wasn’t a violation of their terms of service, same with a picture of 5 year old children and then saying go kill all white people, wasn’t a violation of their terms of service. They are private company and they do make their own rules, but does that give them the right to racially discriminate companies are not supposed to legally be allowed to do that?

There is no good alternative either, I’ve seen people try to start ones that were more in line with free speech, they get popular for a while but everyone goes back. I think that people need to come together more and demand that facebook revamps their moderation and terms of service to be more in line with free speech. They also need to enforce their policies globally across the board the same for all races.

Pat
Reply to  The Viking Hannibal

austin
Reply to  The Viking Hannibal

I had a lady running a con game on me trying to rob me out of money. I reported it to facebook and they ruled it didn’t break their rules. Facebook basically said it’s ok to commit fraud with that answer. Facebook told me they have no credibility with that answer,

They just make it so impossible to even contact anyone. I get sick of digging thru all there nonsense!

jwmajic
Reply to  The Viking Hannibal

I quickly found out when i got banned for calling a troll an idiot that almost every web site on the net uses facebook for their comments section. With out facebook you can’t reply to 75 percent of the stories on the net now.

You need to do your research better. There are no female infantry platoon commanders.

You need to do your research better, I think I’m going to take the word of Guardians of Valor, rather than some forum browser.
http://guardianofvalor.com/prissy-holly-cpt-lyndsay-lowery-accused-stolen-valor-saying-platoon-leader-infantry-platoon/

I have complained to fb on photos with a female giving oral sex, very sexual coments, and harsh threats that sound credible against me or another person. I almost always (8 of 10) times receive back a message that no violation committed or occurred. I’ve also sent in comments that since it wasn’t a violation then they need not say anything if I use foul language. Oh, complained of extreme foul language too.

f*** this bitch, served with valor my ass

And you said kill all white people earlier. Wonder what Time Warner would think of your obvious violation of their acceptable usage policy?

Come on, you guys… a platoon leader in an infantry unit who oversaw a prison??? None of that matches. If she were a captian at the time, she would not have been a platoon leader… much les in the infantry. She would have been an LT and a member of the Military Police (definatly not the infantry). And Colonels typically oversee prisons… not Capains. Stop believing everything you read online.

I love watching people complain about not having the facts, when they clearly haven’t researched if it’s true. A better word of advice is to not assume you know everything and do a little research yourself. She’s proven her status to Guardian of Valor after others tried to demean her in similiar fashions. She is who she says.

Well, I found the picture again and posted it again and then saw this article. Let’s see if it happens to me.

After this story, we just caught facebook saying that instructing people to murder all police is not a violation of their terms of service. Insulting terrorists is wrong on facebook, saying to kill all cops is not, and Americans can’t get enough of it?

Facebook is being run by ignorant liberals it’s expected.

I call bullshit. There were no, repeat no, none at all, female Infantry Platoon Leaders during the War in Iraq

Oohh but look at that, there was. That makes you an idiot that doesn’t know what they are talking about doesn’t it? Yup I’m pretty sure it does. If you only understood how to read the English language, someone made a similar stupid comment and already got smoked for it. You butt hurt because a woman out ranked you?

Took me 5 second on google to prove you wrong.

Are you ok? That’s an NFL cheerleader you moron that isn’t even the same person. Put the bottle down.

I got a 24 ban for telling an anti white troll ” your just an idiot” that’s all it takes to get banned when you confront the antiwhite facebook mafia.

Facebook is indeed cracking down and getting heavy handed with the bans. This story bought me a ban, others are being banned for “insulting muslims” even when they are just defending themselves, and a multitude of other things that should never be ban worthy. Especially considering the things that facebook takes no offense to, such as calling for death to white, christians, poloce, and veterans. Pornography, even underage is not a violation. It makes me wonder why anyone of sense tolerates it.

My friend in the FBI was fired for defending himself compared to the Muslim who threatened him with his life, even though everything was documented/UNDENIABLE… Oh yeah, have fun defending the Muslims who want to chop your head off! (Facebook/crook)! Yeah!! That makes sense…. If you’re a liberal!