An African American male that goes by the name of Furqan Stout decided to celebrate July 4th by defecating on an American flag. We believe this is an Alias since he proudly lists his family members on his facebook profile which have the last name Walker. This is by far the most primal display we’ve seen in the flag desecration movement as of late. You have to wonder if someone who is uncivilized enough to commit such a savage act inspires the racism against himself that he claims he’s protesting against. I mean hey, if you’d do this to an American flag, there’s no telling what you would do.

We have always been fair with race. If you look in the flag desecration directory where we list these morons we obviously do not target race. We definitely did not want to be labeled as racist which is pretty easy to get labeled as these days. We however, are no longer concerned with political correctness, so we decided to look at race in this incident and report on who approves of this activity and who condemns it, by race.

So Lets Look at Race in this incident

Yes, it’s about time we go there.

These people either approved or laughed at it

These are the people that spoke out against this.

We couldn’t tell by the reaction whether they approved or didn’t approve.

I personally feel that this does not imply that 74% of all African Americans in the United States support this type of activity. I think what it shows is that ignorance loves company from more ignorance. Uneducated ungrateful trash like this seem to get along well and congregate together. 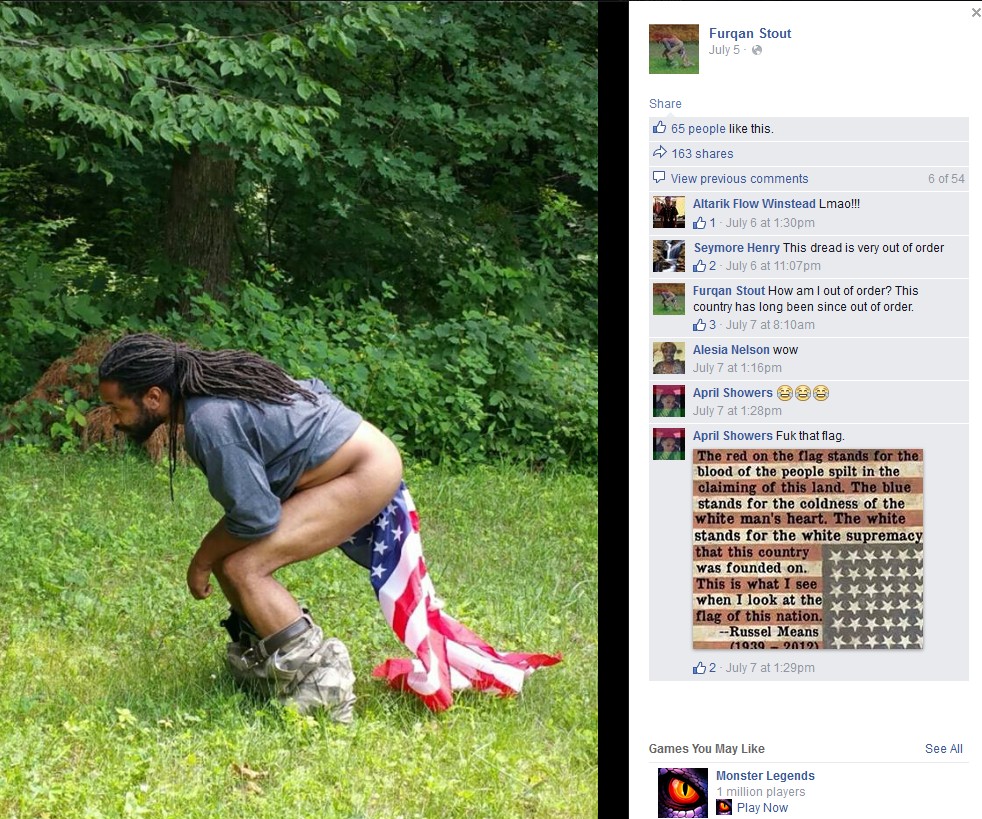 Our Message to African Americans

We researched flag desecration more than any topic we’ve reported about on this website. People desecrating a US flag is just something we don’t tolerate, too many have sacrificed too much for that flag and for our rights. It’s very safe to say we know more about the people behind flag desecration than anyone.

At least 3 out of 4 times when someone desecrates a flag, the African American race is involved by this small group of African Americans who are trying to bring your entire race down. They are feeding your own brothers and sisters a plate full of lies to incite hatred against whites, American in general, and even the US Military. We all read about slavery from history books because there isn’t a single person alive today that lived during that time. Nobody alive today was responsible for it.

If you dislike how you are treated in America, and your true goal is fighting against racism, this should at the top of your list for “causes to oppose” because this entire movement is encouraging far more racism from both sides than it will ever prevent. The racism already caused by this will last for generations, as many people feel passionate about both patriotism and racism.

This movement is trying to link that very thing, Patriotism, to Racism. By doing so they can bait more and more African Americans into hating their country rather than showing love for it. They then convince the same people to burn a flag or desecrate it in some way shape or form, which causes even more racism. The longer this flag desecration goes on, the more divided we become. If you are against racism, try to understand what we’re telling you, and do not support movements that only encourage more. This is not what your civil rights leaders would want.

This is so stupid. Go back where you belong! Africa!!We had nothing to do with slavery!! We have a black president, you have the same rights as us!! Go to Africa and see how you’re treated! Or better yet, go to work!! Are you forgetting a white man freed the slaves??

said white man was shot in the back of the head by a cowardly southerner for his troubles…..good point tho

instead of calling out black people you should call out all Americans. Blacks are not the only ones to desecrate the American flag. Personally, as a member of the Armed Forces of America this image is appalling. However, to think that blacks only do this is outrageous. If this site is only out to look at the wrongs that blacks are committing then you are doing no better at helping bringing this country together. Just my opinion.

Don’t’ try that race baiting bullsh*t on this website because it’s not going to work. It specifically says ”

“I personally feel that this does not imply that 74% of all African Americans in the United States support this type of activity.”

Nullifying any claim you could have to racism. If you look at the flag desecration directory it has an equal amount of people from all races. African Americans are desecrating the flag more than any other race, that’s a fact that’s easy to prove, if you have a problem with it, start speaking out to them about it. IN fact, the leader of the Eric Sheppard Challenge, who is also African American, just started a movement to defecate on American flag that is going viral.

Ken
Reply to  The Viking Hannibal

why post the numbers if you don’t feel that’s what they represent?

The numbers represent that when people get behind any group due to racial extremism they will support and carry it this far, and even further which this article proved when it incited libertus to start the sh*t on the flag movement.

FYI…
Someone is DOXing you…
Nocturnus Libertus on FB

Author
The Viking Hannibal
Reply to  Me

She has doxed me over 100 times in the past 2 months for opposing the #ericsheppardchallenge with this website, I’m used to it, doesn’t bother me. She has also harassed seniors, children, and even threatened to mail me a bomb. I’m her #1, if you go on her website ericsheppard.us you’ll see all sorts of nonsense about me that isn’t true.

You are scum & you are not African-American. You are African. Go home & try that in another country. Also, I bet you like the freedom and social programs that you are probably using and bleeding dry. You’re less than a human & animal. People like you deserve the worst.

You are messed up individual….black white red yellow fat or skinny. No one ows you sh*t

As disgusting you think this is it’s been ruled time and time again it’s freedom of speech.

There is a flag desecration code, and our response to them doing this is this website, which is also free speech, and is extremely effective at shutting them down.

will it be freedom of speech when someone takes you down for doing so?

the gar’s day will come,and when it does he will not be so happy!

I’m white and I approve.