Milwaukee Wisconsin:  A man caught a young teen trying to steal his wallet.   He asks the teen if he would rather be taken to his mothers house or get an “ass whoopin”.   The man says that he is old school and that he doesn’t want to hurt him.   The child does not want to confront his mother so he chooses the second.   The man whips him a few times with a belt, after a minute or so, he stops and tells the boy that he’s going to give him his phone number.   The man genuinely seems concerned about the child, as he wants to help him raise his grades and tells them that he will spend time with him. 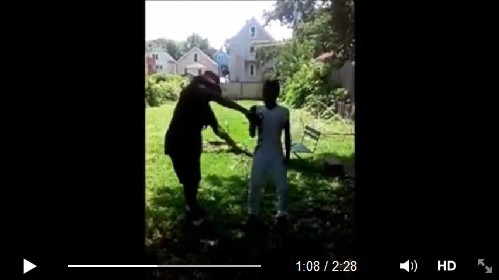 What Do You Think?

Vote in the poll tot he right. Personally I feel that the man was concerned about the child. While the video may be hard for some to watch, there is a good chance that the child will never steel again. This minute of pain the child felt would be worth it if the mans actions did prevent the child from stealing again. Will it? Only time will tell.

How is it “good parenting”? It’s not even his child! I would kill the person who puts their hands on my child.

Sure you would, take a break keyboard warrior.

so you’re saying you would let your child steal. Prior to the “new” parenting style..kids were taught and punished by any adult that saw the child disrespecting or harming an innocent person. Allowing our youth to be “punished” by a counselor does not work. That type of punishing is just a bunch of words passing thru a broken filter. Nothing is retained but instead dumped.

Maybe you, as a parent, deserve the beating if you don’t believe severe punishment for theft is appropriate. Would you feel the same if it was YOUR wallet the little bastard tried to steal?

I GUESS TJE 20% WOULD LIKE TO SEE HIM IN JAIL

The 20% are either guilty of doing the same thing the hood rat did or their kid is.

corporal punishment doesn’t solve anything. So for those of you who think this was OK think about how you were privy to this in the first place. Several million people has seen this on youtube and FB). When does the punishment stop? Why was this allowed to be shown on the internet?

In some cases showing things on the internet helps, as was the case with this story we ran:

After we ran the story, it went viral, it was then covered on local news and now as a result CPS is being investigated for covering up child abuse.

What good would it do to take a ghetto rat like that or his ghetto rat single parent to court. And you aren’t going to make sure of anything or hunt anybody down or do jack squat about it, so STFU. You can’t write a sentence and you’re barely literate.vLpN7

He should have whipped the puke until he was bleeding from every orifice, and forget trying to approach it as a “teachable moment”. That thieving thing is too dumb to learn anything. It is a feral savage.

No it wasn’t his child BUT I honestly do not think he did anything wrong. He didn’t beat him in the face or punch him, he wasn’t excessive. He literally gave him an old-fashioned ass whooping. And the teen admitted that he had stolen before to the point that his mother threatened to take him to a boys home. If the boy was old enough to know how to steal a wallet from someone, he’s old enough to take a whooping. Other people may actually fought the teen for what he did. When boys go to jail that young it really affects them in horrible ways.

I’d rather the child endure an ass-whooping and words of concern for his future than 50,000 volts from a Police Taser as a means of correction.

Should have had police deal with it. Now you have two criminals. Put the man in jail for assult and / or child abuse.

That is what there are police for. That is abuse in no uncertain terms and no one has the right to put thier hands on anyone’s child.

Why the hell do you think would happen when the spanking stopped? You have today’s kids that never got the proper discipline that we did. That’s the entire problem. No consequences for their actions. You do something wrong, you have consequences. Oh but that would be to punitive for them. We don’t want to damage their young minds.
It is the biggest piece of B/S ever heard!

I cannot believe the person that said “before the new parenting, anyone disciplined a bad child”. What year was that? Back whenyu could be shot for stealing a horse? Times have changed. It is scientifically known that corporal punishing children grow up to be abusers. You don’t solve children’s errors with slapping, slugging, whipping or belting. Ever!

I grew up in an old school Italian neighborhood. If one of us got in trouble on the far side of the neighborhood, away from his house, by the time he got home word had spread so fast, and every male we passed either slapped us in the head and told us we don’t act that way or confronted us in front of everyone and made us spew the details so all could hear. It is called discipline by committee and we all have turned out rather well in our lives.

I got my ass whooped by my Mama and my Granny when I got out of line. They put the fear of god into me. Guess what? I have zero criminal record. I’ve held down great jobs. I’ve never abused my kids or anyone else. This “corporal punishment makes them think violence is okay and makes them abusers” is complete bullshit.

Same thing for me and I ended up becoming pretty disciplined from it myself.

That man is a child molester. His fantasy is that the boy will call him and volunteer to be spanked again. Legally, this is indefensible. It is battery, pure and simple with what I believe is a sexual motive.