With the “advancement” of technology and the explosion of social media, one would think that those who have the platform to reach millions would do so for the benefit of the people….not to spew hatred, violence and advocate their fellow human beings to kill everyone…of a certain color that is. Yet that is precisely what Latausha Nedd, otherwise known as “Eye Empress Sekhmet,” chose to do.

37 year old, unemployed, welfarian, Tausha Nedd was arrested on two felony counts for her video “Open Season on da Crakka,” as well as another charge for beating her roommates fourteen year old child with a belt and computer cord. In her videos, Nedd urges her fellow “niggas” to “wake up” and start killing white people, especially cops. According to her, if you’re white, you’re killing their “kind.”

Throughout the 20+ hours of Nedd spewing the same sort of rhetoric the blame game is pretty common– white people are to blame for all of it. Her and her friends, Carol Sullivan, Nocturnus Libertus, King Noble, DeRay McKesson and Palmetto Star, have all been very public with their declaration of war on The American Flag, white people, and cops. Hours after this conference call, journalists were shot on live tv? They talk about biological warfare, taking over by brute force and of course killing. However, a very different persona appeared during her arrest and at court. While in court, in front of a black judge, she denied she said those things and acted confused when the judge read her charges.

Throughout all of the video and audio that we’ve collected, there is not a single mention of personal responsibility because apparently black people don’t have choices of their own anymore?? Never mind that black men are killing black men at a higher rate than heart disease and accidents, never mind that in the past two months there have been over a dozen black children killed by black men. None of that is taken into account – “it’s all you white people that are to blame.”

After we broke the story about Nedd and her antics, we started receiving a ton of mail from people who know her personally. Several were from very concerned community members, family, “friends” and even one of Nedd’s previous employers. The emails and comments providing theories as to why Nedd hates white people included the comment that her “white boyfriend just dumped her for a younger white girl.” Others claim that she has been presenting herself as half white and since the “white population” doesn’t accept that, she wants to see them all die. You know the “rumors around town.” Although I don’t put much stock in rumors, the conversation with Nedds previous employer was interesting to say the least.

Diana Spatz, Nedd’s previous employer and founder of LIFETIME non-profit, has first hand knowledge of how violent and spiteful Nedd is. Spatz employed Nedd in July of 2013 until January of 2014 as a program director. According to Spatz biography:

“LIFETIME, is a statewide organization of low-income parents who are pursuing postsecondary education and training as the means to get their families off welfare – and out of poverty – for good.”

You would think that since Nedd is all about empowering black lives, this would be a great platform for her to positively impact, help and improve those black families that were participating, right? NOPE! According to Spatz, Nedd lied, cheated, stole, conned and assaulted not only her boss, but participants in the LIFETIME program!

Spatz started receiving complaints from her clients that Nedd’s conduct was less than savory in the office. Among the chief complaints were drug use and theft. Accusations and reports were from clients stating they witnessed Nedd use drugs while at work. Nedd had explained to participants that she was “working for free,” a blatant lie, and participants had purchased food for her with their foodstamps! After Nedd bragged to clients that men paid to talk to her online, she was caught conducting escort activities on company time and company equipment.

When Spatz confronted Nedd for stealing a lap-top, jewelry and money from her, the confrontation resulted with Nedd assaulting Spatz, but that’s not where the story ends! After Nedd was rightfully terminated, more threats of “putting [her] in the ground” rolled in making Spatz fear for her life. In addition to those threats, Spatz also claims Nedd badmouthed her to the board of directors, clients, funders and colleagues, all negatively impacting the community outreach programs she supplied in the area. Nedd fled the state, changed her number and closed her facebook account leaving Spatz no way to find her in to issue a restraining order. After all this, Nedd was able to receive unemployment benefits.

One has to wonder, about the sense of right and wrong that some people develop. You cannot cry racism or persecution when you’ve directly threatened not only individuals but an entire race because you’ve had problems with “some people.” I have no idea why this woman hates white people so much, what I do know is you cannot go around advocating that people shoot others simply because of their skin color. I can only imagine her self hatred is being reflected onto the entire white population. Her actions however, prove that yes, black people can be racist!!! The fact she is urging others to put their lives in danger while she sits behind a keyboard, speaks volumes.

I find it ironic that not only does she culture appropriate Ancient Egyptians, she chose a pseudonym that is the polar opposite of how represents herself. She is a drug user, a thief, a con artist, a violent, volatile child abuser, and she deserves what she brought upon herself. If “might” or deity is what she is, then I can see why the FYF and Black Lives Matter movement is sinking faster than a ten pound weight in water. Anyone that questions that this woman is 52 cards short of a deck, should speak to the fourteen year old Nedd beat with a computer cord.

Thankfully the judge recognized the threat to the officers and cared enough to put Nedd behind bars with no bail or bond. She’s not going anywhere. Nedd’s next court appearance is October 15 and hopefully the judge she is in front of continues that no bond order until trial. Considering she has no residency thus a high flight risk, she’ll be there until the end of her trial. Unfortunately, even from behind bars she is STILL running her mouth. If you take a quick listen to this audio from a jail house phone call, you’ll notice she refers to criminals as “innocent.” Liberals, changing the definition of words to suit their purposes since 1970. Isn’t it grand y’all? 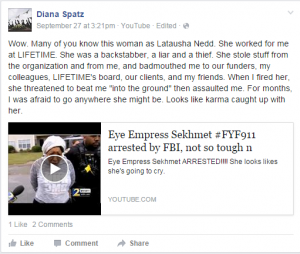 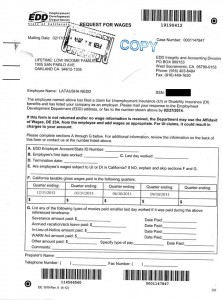 seems she, at the end of the video, spewed another rant about her kind rising up and doing what needs to be done … think they need to have this in court also … everyone that i know that is black said she was a mental case… good to know some of the blacks don’t like that ape then and now don’t care for her bulchit…lolololol

I don’t believe your story because you don’t get unemployment benefits if you are engaged in misconduct.

Hello this is Diana Spatz. I was her employer. I didn’t contest her UI because I didn’t want to risk her coming back to my office and making good on her threats. I actually didn’t think she’d get UI because she only lived in California for 6 months, but she did.

If what you say is true, you should be ashamed. You had a fiduciary duty to the nonprofit and your failure to contest her unemployment request certainly violated that duty and subjected your employer to unnecessary liability and costs.

She has a right to unemployment. She’s PAID into the system while she worked for a sustained period of time long enough to earn the benefits.

Not when you’re fired for theft. Leave it to Libshit California to allow that to happen. That doesn’t happen in all states.

If you fail to contest a prior employee’s unemployment request in another state, do you believe it simply vanishes? If there is an identical uncontroverted claim in another state, why would you expect a different result?

This story is 100% accurate. The people that are coming online are Nedd Supporters that are angry about this story being released.

You really don’t see the difference? Take an IQ test and learn how far you will go in life. Lol

Lies just because you said she did this means I got to believe you what makes your word truth and hers lies plus because it’s published and documented doesn’t mean it’s a fact if your where wrong you would say and do anything to make it seem like your right but you not she got the freedom of speech https://www.facebook.com/RevolutionarybutGangster/videos/655181664622446/ this dude made a video similar to hers with a shot gun saying to kill a peaceful organization because his daughter like black dudes why isn’t he locked up for his video where his trail at if you was telling the truth then why try to convince people she’s wrong and your right if your right then it would speak for itself but yet you try to pursue people’s view to agree with you that’s the whole purpose of the artical to pursue people that she is bad and deserve it because you got the money and power to do so but average people can’t fight back this type of bullshit and you know she can’t defend herself against what you say I’m sure you get paid a lot to lie

Don’t worry, she’ll be in legal trouble again. She’s a repeat offender, so the next time she commits a crime she’ll likely go to jail.

I hope she gets years! Lol toxic bitch!