Nocturnus Libertus: More should of Died In Paris 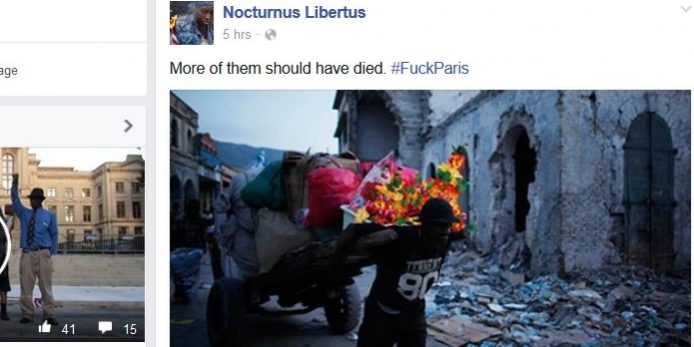 Recently Nocturnus Libertus took to facebook to express her outrage that more people were not murdered in the horrible terrorist attacks in Paris. She posted the picture you see to the right (bottom if on cell phone) just 5 hours ago at the time of writing this article.

Posts like these combined with her outright hatred for America is probably why she gets so many followers on her social media that are affiliated with ISIS, take for example the guy pictured below:

We’ve all seen screenshots of questionable speech getting banned or censored from facebook. Recently Mark Censorberg was caught on open microphone saying he’d delete negative posts about the European Immigration Crisis. Nocturnus Libertus, as you can see by the picture, brags about getting countless people banned off of facebook for saying things not nearly as horrific as “I wish more would of died in paris”

She followed up by using the facebook French Flag option for your picture to mock the dead even further. She also posted pictures of people burning the French flag.