You are here:
RaceTop Stories 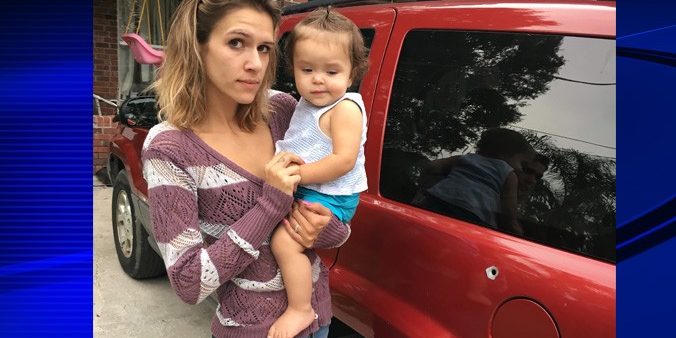 It happened on October 16th, yet none of us have heard about it. A mother was trying to leave the parking lot after shopping with her 1 year old daughter when a crazed man illegally parked to block her in.

“He wasn’t even in his car when I was reversing at the time, He jumped in his car and pulled into a spot to get next to me and he was mouthing so I rolled my window down about three inches to hear what he had to say.”

The man then began screaming racial slurs at the mother and 1 year old child before opening fire on the car as she tried to pull away. The bullets ended up missing the child by just a few inches. One bullet even hit a child’s backpack and clothing in the rear seat.

The mother believes the Southern Confederate sticker on her windshield may have provoked the attack. She’s going to take it down to prevent future altercations and is happy that her and her baby are still alive.

The Police know where the suspect is, yet no updates

As for the shooter, investigators won’t have to look far. Sources say he worked jobs for Labor Ready and was headed to a job just before the shooting happened. And his information was handed over to authorities. – Bay News 9

So a man screams racial slurs at a white woman over a confederate flag and then opens fire on her and almost kills a 1 year old. The police apparently know the suspect was, and yet there are no updates in over a week by the US mainstream media.

Could you imagine how much coverage this would of got if a white person for example shot at a 1 year old African American child because their mother held the RGB flag? Why the double standard when reporting race from BOTH SIDES on this issue, not just the Liberal side?