5 NC Teens Burn Possum To Death While It gave birth

Five 12 – 13 year old North Carolina boys apparently enjoyed beating a Possum to death while it was giving birth. Neighbors testified that the boys were laughing and having a great time as they eventually set it on fire, killing the possum and all of its children. They punishment for their horrific crime? A misdemeanor charge. Yup that’s it, a nice slap on the wrists so that America can put them well on their way to being deranged serial killers when they hit adulthood. 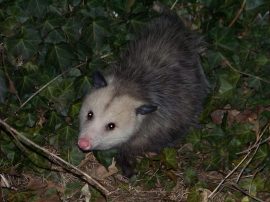 “A group of neighborhood juveniles found an opossum and chased it. The mob struck it with bricks, sticks, and rocks until it died in a ditch. The animals was also doused with lighter fluid and set on fire. During the final attack, several newborn babies began to come out of the female’s marsupium also known as the pouch. The hairless babies succumbed from the attack.”

“I walked out and basically saw them bludgeon an opossum with bricks and stones. It was way beyond animal cruelty. It was just inhumane. They were having a ball doing it. If you can do that to an opossum, the next step is dogs, cats, moving up. You never know what area of the food chain they’re going to hit next.”

So When Do Animals Get Justice in America?

Police charged two of the five boys, but others may be cited. At this time, the crime for killing the opossum in such a cruel manner is a misdemeanor due to the boys’ ages, 12-15. However, sources say the charges could be updated.

I’m sure those charges wont be updated at all. Apparently North Carolina has serious problems with Animal Cruelty laws. They only charged 2 of the 5 boys with misdemeanor charges for burning a mother possum to death while she was giving birth. Children that are this deranged at the age of 12 should be thoroughly investigated as well as their parents who have obviously failed at teaching their children a moral compass.

I write stories about animals and animal abuse. If that topic interests you, you should view my profile and follow me. That way you’ll be notified of new stories I post.
View Azrael's Profile
Like
Category: Animals in the NewsBy The Viking HannibalJune 21, 20152 Comments
Tags: animal abuse
Share this post
Share with FacebookShare with TwitterShare with Google+Share with PinterestShare with LinkedInShare with WhatsApp