While driving down the street, a driver in Brooklyn noticed a car in the middle of the road and swerved to miss it. Apparently the driver was startled as they stepped on the gas instead of hitting the brakes. The SUV flew over the curb and hits a light pole, then a truck, then a man delivering flowers, and then finally the side of a house. She later realized the cat that she swerved to miss, was dead. 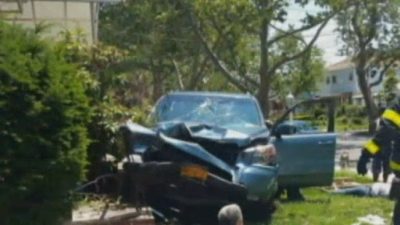 “She tried to avoid hitting that cat and she just lost it, Instead of the brakes, she pressed the gas.” -witness Stephan Lamour

“We heard a large screech, tires, then there was a loud boom.” -Marvin Kipp. 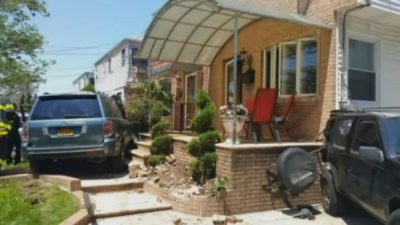 Aubrey and Marvin called police and ran outside while Lamour ran over and helped put the SUV in park. Together, the neighbors checked on the driver and the man hit by the car.

“I thought he went through the window and I said, ‘What’s he doing on the floor?’ It looked pretty nasty, but thank God it’s good now.” -Lamour.

Neither the driver nor the man hit suffered life-threatening injuries, said police. The crash remains under investigation.