Kevin Faircloth of Waterbury Connecticut was charged with beating and sodomizing a small dog with a candle.   Kevin blamed it on the fact that he stopped taking his medication because it made him tired.   The dog had to be put down due to the severity of the injuries.  Kevin was arrested for putting a pipe bomb on a car n 2009.

Faircloth’s sister, Dawn Dempsey, was arrested in October after an animal control officer brought Riley to Mattatuck Animal Hospital after Dempsey reported the dog was a stray that she had found. But police talked with Dempsey’s neighbors who said she had owned the dog for years.

Faircloth later admitted to police he stopped taking medication for depression and schizophrenic paranoia because the pills made him tired. He told a detective that at some point while he was off of those meds, he beat Riley “pretty bad” then sodomized the dog with a candle.

Faircloth was initially detained for violating his parole, but was hit later with additional charges related to the alleged abuse.   Faircloth was held on a $5,000 bond and was due back in court next month. Court records indicate Dempsey was granted a court diversionary program, which will likely lead to a dismissal of the animal cruelty charge she’s facing. 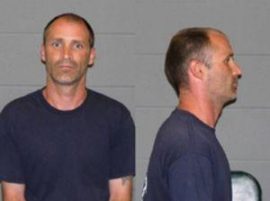 He was charged years ago. What was the outcome?

We’ve looked and have not been able to locate any information on him after this was made public.

Animal cruelty is a felony in most states!

I was trying to find follow ups to this story and there is nothing. Another scumbag and his trollop sister suffering no consequences for torturing an poor animal. Just sick. We are all getting sodomized by our “justice” system.

He was just released from jail

This I’m sad to say is my uncle that I have no wish to talk to. He was charged and sent to jail. I have learned that he was recently released.