Michael Seno beats disabled vet for telling him to slow down 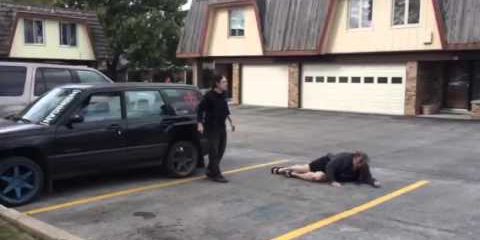 Michael Seno kicked, beat, and threw a disabled Vietnam Veteran to the ground after the Veteran told him to slow down in a parking lot due to children. This story was first reported by Popular Military and The Patch.

Richard Jones, 66, allegedly asked Seno to slow down after stepping out of his car in a parking lot. Apparently Seno started a verbal confrontation with Jones. This lead to punches being thrown and Jones being thrown to the ground, kicked, and beaten.

Jones received two broken nasal bones, black eyes, and a torn-off toenail. A photo taken during the incident clearly shows Seno standing over Jones. Jone’s wife claims a neighbor had to pull Seno off of Jones to stop the beating. Jones lost consciousness briefly as they waited for an ambulance to arrive.

Jones is a decorated Vietnam Veteran who suffers from PTSD and Parkinson’s Disease. Jones uses a cane to walk. He was found bleeding from the mouth and nose. Jones was taken to the Palos Community Hopital and later transfered to Loyola Medicine according to The Patch. Jones obtained a restraining order again Seno, who has been issued a November 16th court date for Battery.

According to Uncle Sames Misguided Children an anonymous source sent them screenshots of the attacker bragging about beating up the disabled Veteran:

“His parents didn’t raise him right, I feel that by trying to protect little children in our own courtyard by telling him to simply slow down was not a call to war on a senior citizen and disabled veteran. That shows very poor upbringing and character on his part. I never saw anything coming, I never even knew he was going to swing at me. It was just ridiculous. I’m a decorated Vietnam veteran. There’s no reason for this!” – Jones

What others say People that claim to know Michael Seno don’t have anything good to say about him:

Help us enter him into the hall of shame

If anyone has a picture of this person please let us know in the comments so we can permanently enter him into the hall of shame. His foul act would never be forgotten.

Good find I might be able to use that but I’d blur the child out. It would be great if someone had a picture with some way of showing that it was definitely his account that posted it.

Two years ago he broke into a car for cigarettes an he also broke into other cars for a gps,an change. a real LOOSER!

Take it and delete my link if you want. But not my comments please. Maybe ask the FB group owner how confident they are that’s him. But I don’t think you need to shame him much. That area is filled with bikers who learned to be tough at war, not MTV like this punk. Anyone can spot his ride. He’s pissed off a caliber of people not phased by his street “cred”.

I know him and that picture is him