In a recent article posted on MSN From Reuters, MSN Clearly tries to incite hatred for the US military as one of the first things the article on their website says is:

The anti-Muslim event outside the Islamic Community Center of Phoenix was organized by an Iraq war veteran who posted photos of himself online wearing a T-shirt with the slogan “F— Islam” on it and waving the U.S. flag.

The Illwriteit team wonders why MSN has to go so far out of their way to portray the US military as being islamaphobic and hate mongers.  If you hate the military that bad, what are you doing here?  Why not move out of the country and base your corporate headquarters elsewhere? 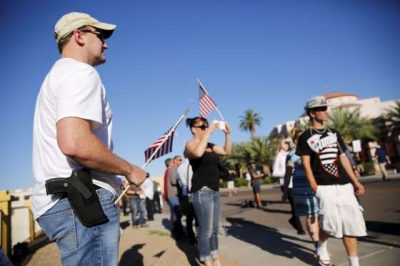 PHOENIX, May 29 (Reuters) – More than 200 protesters, some armed, berated Islam and its Prophet Mohammed outside an Arizona mosque on Friday in a provocative protest that was denounced by counterprotesters shouting “Go home, Nazis,” weeks after an anti-Muslim event in Texas came under attack by two gunmen.

The anti-Muslim event outside the Islamic Community Center of Phoenix was organized by an Iraq war veteran who posted photos of himself online wearing a T-shirt with the slogan “F— Islam” on it and waving the U.S. flag.

As the event got under way on Friday, demonstrators on both sides screamed obscenities at each other as police in riot gear swiftly separated the two groups, each with about 250 people, using police tape and barricades.

“This is in response to the recent attack in Texas,” organizer Jon Ritzheimer wrote on his Facebook page announcing the event at a mosque targeted in part because the two Texas gunmen had worshipped there.

More than 900 people responded on the event’s Facebook page that they would take part in the demonstration, and by 6 p.m. local time (0100 GMT on Saturday) police were expanding their presence in anticipation of growing crowds. Officers with riot helmets and gas masks formed a cordon for several blocks.

Among the anti-Islam protesters, some of whom called Islam a “religion of murderers,” more than a dozen men in military clothing carried semi-automatic weapons. Others waved copies of caricatures of the Prophet Mohammad drawn at the Texas event.

Depictions of Mohammad, which many Muslims view as blasphemous, have been a flashpoint for violence in Europe and the United States in recent months where those displaying or creating such images have been targeted by militants.

Meanwhile, anti-Muslim groups have been active in the United States, buying ads and staging demonstrations characterizing Islam as violent, often citing the murderous brutality of Islamic State militants in Iraq and Syria.

The Phoenix mosque targeted on Friday has condemned such violence, and held a series of sermons at Friday prayers last year by an imam who criticized militant Islamist groups such as Islamic State, al Qaeda and Nigeria’s Boko Haram.

The president of the center had urged worshippers not to engage with the demonstrators.

“We should remind ourselves that we do not match wrongness with wrongness, but with grace and mercy and goodness,” Usama Shami told worshippers during Friday prayers.

While some counter-protesters outside the mosque responded to the anti-Islam protest with obscenities, others followed his advice and chanted “Love your neighbor.”

In January, gunmen killed 12 people at the Paris office of the satirical magazine Charlie Hebdo in anger at the magazine’s cartoons featuring the Prophet, and a similar attack was foiled in Texas on May 3.

The pair of gunmen who opened fire near Dallas outside an exhibit of cartoons featuring Mohammad were shot dead by police without killing anyone. Leaders of the Phoenix Muslim community confirmed both gunmen had attended the Phoenix mosque targeted in Friday’s demonstration.

Todd Green, a religion professor at Luther College in Iowa who studies Islamophobia, said that the brutal acts committed by Islamic State and other militant groups have colored many Americans’ impressions of Muslims.

“Almost two-thirds of Americans don’t know a Muslim,” Green said. “What they know is ISIS, al Qaeda, and Charlie Hebdo.”

U.S. officials are investigating claims that the Texas gunmen had ties to the Islamic State, but said they had not established a firm connection.

The Department of Homeland Security has been in touch with state and local law enforcement authorities, and was monitoring the situation in Phoenix, White House spokesman Josh Earnest said.

“Even expressions that are offensive, that are distasteful, and intended to sow divisions in an otherwise tight-knit, diverse community like Phoenix, cannot be used as a justification to carry out an act of violence,” he told reporters.

“True Islam is terrorism. Yes, the ones that are out committing these atrocities and stuff, they are following the book as it’s written,” Ritzheimer told CNN.

Ritzheimer was a staff sergeant in the Marine Reserve and was deployed to Iraq twice, in 2005 and 2008, the Marine Corps said.

Anti-Islam activist Pamela Geller, who organized the Texas event, said she was not involved in the demonstration in Phoenix.

The mosque is a former church near the city’s international airport that can hold some 600 worshippers. The Phoenix area is home to tens of thousands of Muslims.

The event is part of “an epidemic of anti-Islamic sentiment” that goes beyond protesting against extremism, said Imraan Siddiqi of the Arizona chapter of the Council on American-Islamic Relations.

You go at the military like that, we’re going to come at you. This is liberal rag journalism, and this is where movements like the #ericsheppardchallenge start.