Last Update 5/31/2015
Looks like Jeremy Garver deactivated all his social media accounts at this time.

Jeremy Garver decided to step on an American flag while saying “F*** the American flag and everything it stands for.  He then tried to delete his social media accounts and the picture itself, but Jeremy didn’t understand, the internet has something called a cache, and America has these things called “Patriots”, which were more than willing to share their screenshot of the event to us. 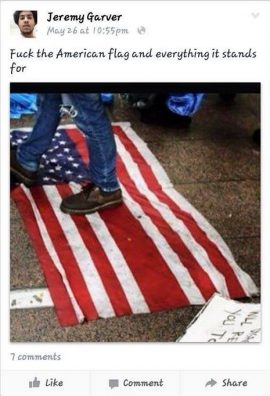 There was a protest at the Carl’s Jr. that he works at. He was fired. We should set him up a gofundme page and buy him a ticket to a middle eastern country.

Lee are you sure, we heard yesterday via a private conversation someone posted that the store made it look like he was fired but only sent him home for a week or so until it blew over?

I live right outside Houston let me know what carl’s jr he works at I will find out.

Let’s go back and find out? Give me the address to the Carl’s Jr. I live close enough to drive there and find out for myself!!