“No Gays Allowed” in Grainger County store in Washburn TN

A sign in a Grainger County hardware store in Washburn Tennessee is causing a lot of controversy.   The first sign said “No Gays Allowed”.   The store owner then said he wanted to try to be a bit nicer so he hung up a second sign that said he has the right to deny any customer based on free speech and freedom of religion. 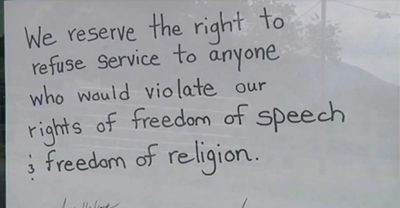 “A lot of people have called me and congratulated me,” said owner Jeff Amyx.

There are also calls opposing his decision

“People calling and threatening me. Telling me I would regret this. No I’ll never regret this, the reason I put up the sign is to let the homosexual people know that there are Christian people that are willing to take a stand.”

On Tuesday, Amyx took down the previous “No Gays Allowed” sign and put up a sign that reads:

“We reserve the right to refuse service to anyone who would violate our rights of freedom of speech and freedom of religion.”

“People told me I ought to do it a little bit more, make it a little nicer because I’m a very blunt person. I don’t hate people. It’s not the people I hate, it’s the sin that I hate. Until they tell me it is illegal to have my freedom of speech and to my freedom of religion, the sign will stay.”