Denver Colorado: A 44 year old African American male, Vincent Broughton, was arrested Tuesday on charges of committing a biased motivated crime, disorderly conduct, harassment and littering. Police claim Broughton left racist messages outside a Colorado Springs church that is predominantly attended by African Americans. The signs have appeared on three consecutive Sundays outside New Covenant Church. One said “Black men be aware, you are the target.”

Broughton told KRDO-TV he posted the signs all around town because he wanted people to know how corrupt the police department, the city council and the people in the community are. He also claims he had a bad experience with city officials. He could not explain why he targeted churches. 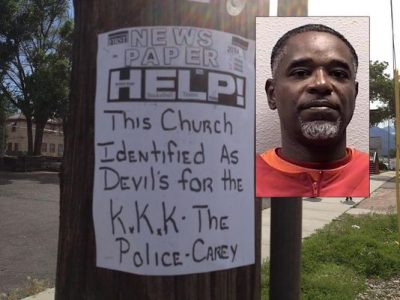 What we don’t understand is how can you possibly get charged with racism against your own race?

black men be aware you are a target,that is so true,most likely to be harmed or killed by one of their own kind,it was at one time negro,colored,African-American,now it is black,what will they call them selves next?hell most of them can not even find Africa on a globe,much less tell anyone which country in afrcia they are from.moron’s 99% of them.there are now and have been only three true races of people, African,asian and anglo-saxon.most of the ones that call them selves black are so light skinned it is f’ing amazing.