Officer Jeffrey Feldewert received a letter June 11th stating that he would be suspended and then terminated for a comment he made on facebook on December 18, 2014.

Officer Feldewert was commenting on a facebook post about an arrest made in a bar brawl in Ft Lauderdale.   The 3 suspects were African American.   He posted “Typical Hoodrat Behavior”  and a picture that showed an African American getting arrested with the caption:

“Black People. Because without them the evening news wouldn’t be as much fun to watch.” 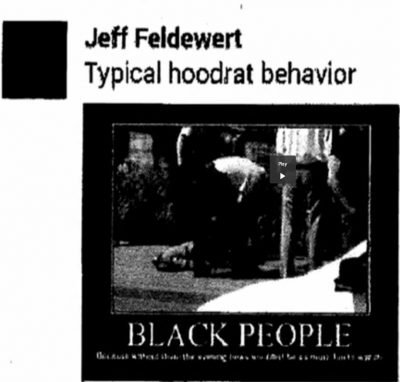 Officer Feldewert also posted a picture on his facebook with a skull and his police badge with the caption “Savage Hunter”.

This isn’t the first time Fort Lauderdale has been involved in a racial incident.   Just a few months ago 4 police officers were fired for posting several racist videos, racist texts, and racist posts.

Feldewert was also the subject of a recent internal affairs investigation but information on that will not be made available until after the investigation is complete.

the truth hurts,what has happened to the good old days,when a person could speak the truth and nothing would happen? I would pin a f’ing medal on his chest!