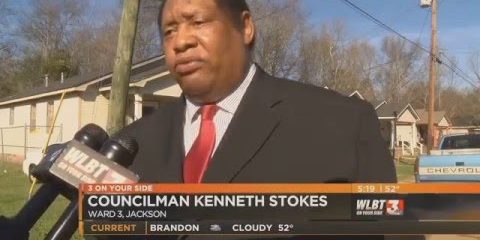 Kenneth Stokes, a Jackson council man of Ward 3, has declared his intentions toward law enforcement in his jurisdiction. Not only will they not be tolerated, he suggests physical abuse toward them. Not only has he shown exactly how bigoted he toward a group of people, he naturally takes it a step farther. Calling only for “black” leadership to make this decision, he perpetuates the stereotype of violence being the solution. Had any other city leader called for violence against a specific group, I’m sure he would have been silenced within minutes. Not only does he want the Jackson police to step back, but he demands legal action against any outside jurisdictions entering his city limits.

“What I suggest is we get the black leadership together, and as these jurisdictions come into Jackson we throw rocks and bricks and bottles at them. That will send a message we don’t want you in here.” states Stokes.

Stokes, often described as forward, has drawn media and public attention to him with ease. He is a longtime resident of Jackson and has held the Ward 3 position from 1989, only relinquishing it for two years to his wife. In January, when Mrs. Cooper-Stokes was elected as a court judge, Stokes resumed his seat by winning a land slide of the vote. The question now, is who will support this outrageous statement? At the very least, he should be set as an example, and pulled from his post.

No Police, No Peace

Jackson’s crime rate has been decreasing slowly over the last few years, but if Stokes gets his way, what will it mean for residenst of this city? When criminals know there is a safe haven waiting for the, you will open you city up for chilling consequences. It may be popular in some circles to make this a part of your agenda, but you clearly don’t have your communities best interest at heart. This may have brought Stokes the attention he known for craving, but tying the hands of our law enforcement is setting a dangerous precedence. As the old adage says…be careful what you wish for.