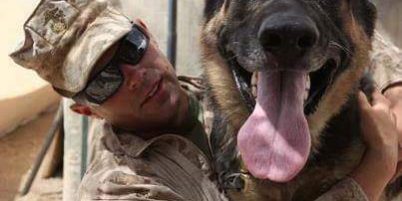 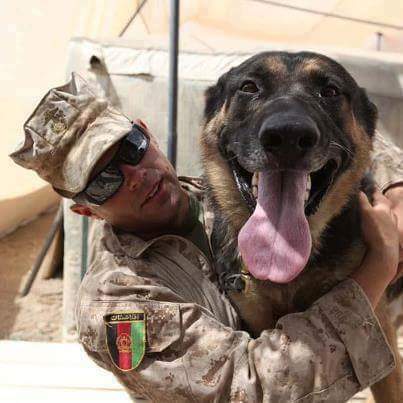 Soldier with a happy military working dog. (photo on Facebook)

What could be better ways to celebrate this year’s holiday season with? Your family, friends, and don’t forget our special four-legged friend, the ‘other forgotten soldier’ who have to go through blood, bravery, and sacrifice in order to save a soldier’s life, they are called military working dogs. These dogs are our first animal ever to defend our country and soldiers in times of war.

Throughout history, trained-dogs were essential in aiding warfare for various tasks from mid 7th-century B.C. to present day. The Greeks and Romans used large dogs often mastiff or molosser dogs with armored or spike collars to attack their enemies. During the Belgian War of 1914, dogs were used to help carry weapons such as Maxim guns on wheeled carriages and assisted in carrying the wounded during the war. Sending messages from one handler to another were also implemented with these dogs to help with communication. Dogs were often used as mascots in the military to uplift morale, especially during World War 1. In Vietnam, over 400 dogs were used as sentry or guarding dogs to protect areas of weapons from the U.S. Military, which was a large success.

Most importantly these dogs are trained to smell and hear danger from coming. With their keen sense of smell and hearing, these dogs can detect booby traps and concealed enemies from many yards away. In modern days, Police dogs often use K-9 ,German Shepherds for used in the military. In 2011, approximately 600 were used during the Iraq, Afghanistan wars.In addition in proving how they are effective in the Military, Law Enforcement use police dogs to detect drugs and explosives. They aim in most useful tool to help police men and women to search for criminals when in hiding.

After these dogs are retired from their duties, some go into adoption to a new home or to a new handler. In good news this recent month, President Obama have signed a bill to have enough funds to send home these dogs safely to their handlers or to an available adopter after they are retired in Afghanistan.

In no doubt these dogs are there to protect men and women from danger when fighting overseas. Although they should be given medals in their efforts of sacrificing their lives just as soldiers, they are and should be recognized as brave, courageous heroes who are not just called dogs.

Thank and gift this year holiday season an adoption or donation to a retired military working dog by visiting this site: www.save-a-vet.org

Wow…these animals are far to often overlooked.. I never knew they jumped out of helicopters..very impressive and thanks for including so many pictures.. Really brings the article to a different level..