Hating America runs high at Wright State University in Dayton Ohio, as this is now the second student of this anti American University we have caught doing this.    Ashley Grubb did try to cover her tracks and remove all evidence of this on the internet after she obviously received massive backlash, the only problem is, the internet has archives and “cache” in which incidents like these live forever.

Ashley says in her own words that it makes her “Happy” to participate in a demonstration that stepped on an American flag.    Well Ashley if that’s the case, It would make me really happy if you get the F*** out of this country. 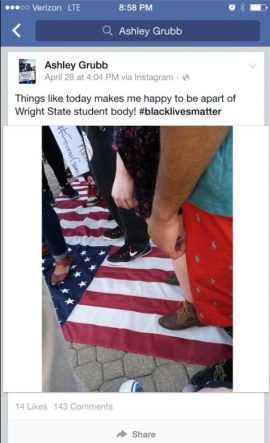 Well one big mistake Ashley made was not changing her default profile picture, that was the ONLY way we could make a positive match. Look at the profile picture in the above photo, here is the current profile picture. Ashley is the girl on the right, as tagged by her feminist movement. Thanks for turning one of your own in feminists 🙂 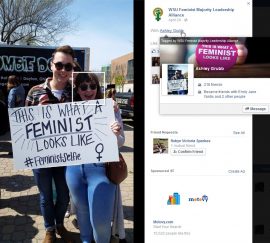