You are here:
Politics 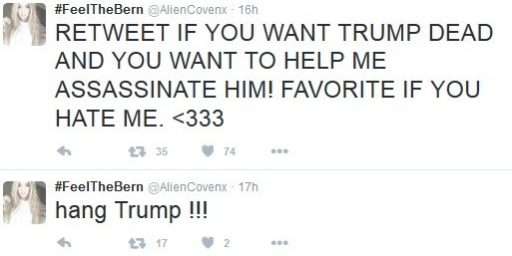 An avid Bernie Sanders supporter who recently started a #killtrump campaign on twitter took it one step further by threatening to assassinate Donald Trump. The twitter username is @aliencovenx. They appear to be impersonating Camila Cabello.

The following screenshots were obtained via TweetTunnel.com, which lets us go back in time to look at older tweets. The Bernie Sanders supporter specifically threatens to kill Trump if he wins the nomination:

And just when you’ve thought you’ve seen enough liberal filth for a day, the Bernie Sanders supporter also hopes that Donald Trumps Pregnant daughter gets raped, as well as his wife. What a tolerant liberal:

We did our own investigating since it’s obvious this person is impersonating a television personality. One thing worth mentioning is the person specifically follows a Missouri for Bernie Sanders account:

Now we wanted to look for people who may of have interaction with this account before, as they would be the best place to start for law enforcement if they want to determine who’s making the assassination threats:

The two above accounts would be a great place to start, both revolve around Lauren Bennett, and mention @aliencovenx as if they know her at a friend level.

You also have this Sterling Holmes man who mentioned the aliencovenx on facebook before they were banned, this guy seems to be active in the liberal political scene, why is he endorsing people who want to assassinate presidential candidates:

Here are a few others that mention the same account:

One of the above screenshots comes from a group that identifies as an official political organization on their facebook page. I find it extremely interesting that we now have political organizations in the USA that endorse assassinating presidential candidates whom they disagree with, no surprise they are socialist liberals.

This has been reported to the secret service, the proper authorities are investigating.

We were the ones to discover this on our banned Reddit account /r/TrumpThreats. We are now over on Voat: https://voat.co/v/TrumpThreats if you want to discuss this incident further, or about our new subverse let me know.

(Why does) Black life matter? It seems to be a bunch of criminals black (and white liberal) who just spread hate and threts aginest vet, cops and consevatives. Everyboady who dont suport them is raceists, and Zuckabergs bajn of their opponent shows were he stays in the case of free spetch. May be he sees himself as their future fuhrer? But, back to the question, why shuld the life of them who want to take down everything I stand for matters to me? I dont care if they die…