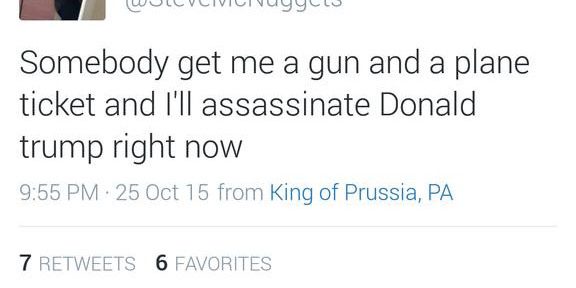 A man that goes by the name of Jose Hennessy (@SteveMcNuggets) on Twitter recently tweeted “Someone get me a gun and a plane ticket and I’ll assassinate Donald Trump Right now”. Shortly after users began retweeting the tweet to the CIA and FBI. Jose Hennessy then decided to remove the tweet to try to hide the tweet, unfortunately for him, the I’ll Write it team has the screenshots.

There is no reason to report this to the FBI or Donald Trumps campaign.   I.W.I. has already contacted the FBI at their Philadelphia office as well as Donald Trumps security detail.   We also contacted Jose’s Place of Employment (Pizza Hut), so this is being investigated, and the proper authorities have been notified.

We are unsure if his real name is Jose Hennessy, previously he used the name Theodore Glosevelt before changing it to Jose Hennessy. He also cannot get out of lying as you can see by the captured screenshot below he called the person who initially reported him to the CIA a snitch:

StevemcNuggets is definitely not the sharpest tool in the shed, as he also uploaded a picture of him at his job just a few days prior:

After we got off the phone with the FBI and Donald Trump’s security staff we contacted the local Pizza hut and spoke to his manager. They were none too pleased about this incident and handled the situation professionally. They are currently looking into what store he works at and assured us he will be terminated for his actions…