According to her facebook page, Cali Hemler decided to celebrate July 4th by setting an American flag on fire that probably didn’t belong to her.

Cali uploaded this picture July 4th 2015.   Due to apparent backlash (fast), Cali has already attempted to remove the photo from social media. At first she just removed the photo and left her profile up and was responding to comments against her publicly, but as of 10am 7/7/2015 her facebook profile has been completely removed. Her last known public post was to a comment about her employment to which she responded:

“I do not work at Hot Topic” – Cali Hemler 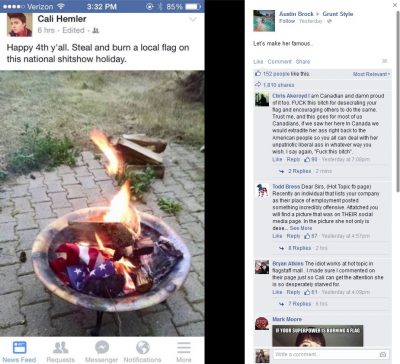 It has been claimed by several that Cali Hemler’s grandfather is John Vaughn Hemler Jr. (Colonel, ret.). If this is true her grandfather lead a special forces unit in the Vietnam war and also worked in the nuclear program for the military in the 60’s.  He Passed away on September 25, 2010.

John received an appointment to the United States Military Academy from New Mexico Congresswoman Georgia Lusk, and entered the Academy at West Point on July 1, 1947. In June 1951, he was graduated as a second lieutenant in the U.S. Army Air Defense Artillery and was married to Marjorie June Ericksen at West Point. For the next 28 years, John served in various positions and locations in the United States, Germany, Korea, and Vietnam. In 1958, the U.S. Army sent him to graduate school at the University of Arizona, where he graduated in 1960 with a Master’s Degree in Nuclear Engineering/ Nuclear Physics. For much of the rest of his career, he was engaged in nuclear activities, ranging from atmospheric nuclear device testing in Nevada (1962), planning and conducting underground nuclear tests (1965-1968), commanding a nuclear-capable artillery battalion in Germany (1968-1970), chairing a US Interdepartmental Delegation to a NATO group studying the effects of new technology on nuclear warfare, to his final assignment with the Defense Nuclear Agency, Kirtland AFB, where he was involved in the planning for, and implementation of, the cleanup of nuclear contamination caused by 1950s nuclear testing at Eniwetok Atoll, Marshall Islands, Western Pacific (1976-1979). In Vietnam, he commanded a multi-national (Australia; New Zealand, Korea, U.S.) Special Forces Group which trained Vietnamese and Cambodian military units in all combat regions of South Vietnam. In January, 1979, John retired from active duty, in the rank of Colonel, at Kirtland AFB. His military decorations include the Defense Superior Service Medal, Legion of Merit (3 OLC), Bronze Star (1 OLC), Army Meritorious Service (1 OLC), Vietnamese Distinguished Service Medal, Presidential Unit Citation, and Parachute Badge (U.S., Vietnamese and Cambodian). – From Legacy.com

Thanks to the fine men and women at A Place for Vets for finding these.
Instagram
Twitter 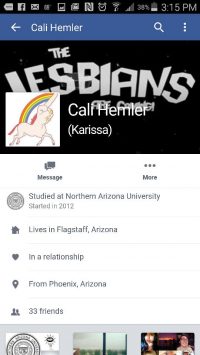 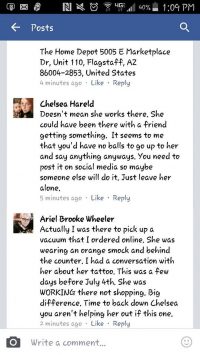 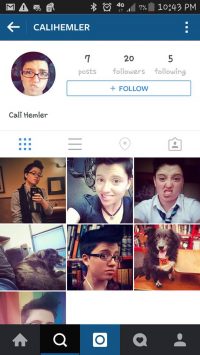 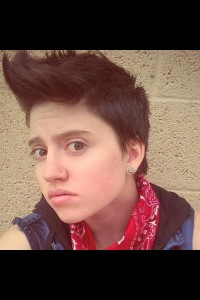 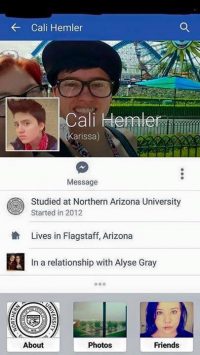 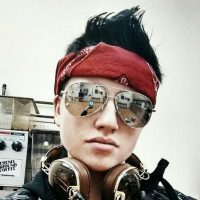 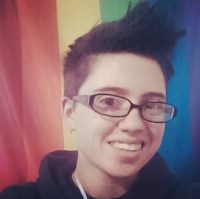 Cali just disrespected every single man and woman who died for that flag to protect the freedoms that she has today, including her grandfather (if that is indeed him). If it wasn’t for their sacrifice, Cali wouldn’t have the freedoms that she enjoys today. Cali is very big on same sex rights, some of the countries US soldiers have fought against are not.  There are still countries in 2015 where it brings the death penalty. The USA is not among that list largely because we have the greatest military in the world that protects our great nation against extremism that would murder someone based on religion or sexual preference.

Show some respect Cali, your grandfather would be ashamed of you!

She hasn’t worked at Bookman’s for two month’s. This is coming from her ex supervisor who I got an email from yesterday.

She quit Bookman’s awhile ago. Heard ( just rumour) that she works at home depot, don’t know which side.

I shared the post about this on facebook. It was removed within moments from my page and others who had previously shared it!
I also saw her threatening to do the same thing at Walmart in Phx on Sunday. I don’t know how to attach the picture.

It wouldn’t surprise me if facebook tried blocking something like this. We’re updating it too and putting more in about her grandfather and current information. I will look into it if facebook is blocking it we’ll use a URL shortener there is nothing wrong with this article content wise.

You can post images just by copying and pasting the link to the image in the comment, the comment will automatically render the image for you. Or you can make sure the next comment that you respond to from this one uses your right email address and an admin can email you, you can email them back with the picture if you’d like.

I just tried it is working for me, if they seem to be blocking it from you try using the buttons at the top/bottom of the page, if that doesn’t work try using a URL shortener. 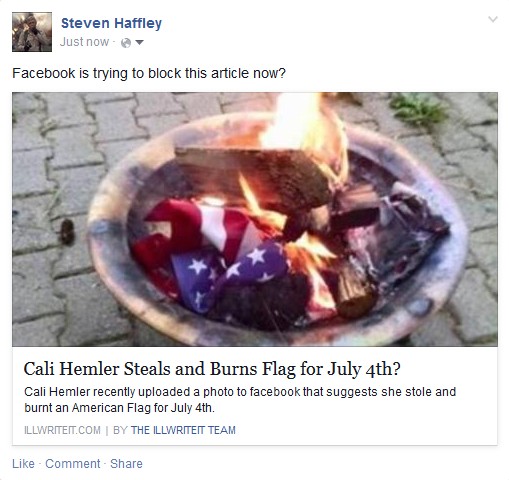 ya’ll are terrible people. the flag is a piece of cloth. burning it is not illegal. im offended by you and yours.

I’m glad you’re offended Cali. I’m offended by you stealing someones flag and burning it on July 4th. If you hate this country so much feel free to leave.

I know it’s you as well, it comes back to exactly what you live at via GEOIP but I will not use that against you or post it publicly.

Stillnotacrime
Reply to  The Viking Hannibal

You are the reason this country is not as great as it once was. You put the well being of a cloth above that of a person. You worship patriotism so hard you can’t see the damage you cause to American citizens.

Johncarlsonissad
Reply to  The Viking Hannibal

Oh, Johnny. So wrong about so many things. It’s okay buddy. You’ll figure it out someday.

Johncarlsonfeelingblue
Reply to  The Viking Hannibal

Johnny! Why you keep deleting me? Having a hard time handling truth? Feeling ashamed of yourself? You’ll never fly like that Johnny boy.

Nobody deleted anything you wrote, my name is Steven not Johnny, and you see what I do. Google your name this site is #1 and it will remain that way for the rest of your life. I did get you, and you can’t do sh*t about it.

john carlson is feeling depressed. he cant get his pilots license. so he’s going to incite violence against someone who did nothing to him to feel better about his sad little life. lets all cry for him.

https://instagram.com/p/u_pCJbKRZB/ I know who u are Cali where you are your sad life has a target on your head

Run on sentences and vague threats. Dang hunter, you sure showed me.

just shows how stupid you really are I can get it I am going to get it so wrong again nothing stopping me so much for the sad life .. Run Forrest runBut I guess you have no reading comprehension

Is this how soldiers treat their citizens? You have no honor. You are a disgrace.

You do realize that every time you attempt to troll soldiers and call them disgraces that you are disgracing your LGBT movement you’re so proud of and turning thousands if not millions against it right? There are even LGBT people slamming you on the facebook page where this is being discussed at. So if you won’t take it from soldiers, take it from your fellow activists, you’re a piece of trash, stop ruining their name.

I believe so lol, she really “got me” good.

What a f*cking joke . Welcome to the wall of shame .. From now on your Ace Vantura.

Cali Hemler wall of shame! Very well deserved. Keep enjoying those freedoms this country affords you while you sh*t talk it! Please leave.