It started around 11 p.m in Fountain Square Cincinnati. A concert and baseball game were letting out around this time. A group of teens became unruly. It is alleged that a white man was assaulted by a group of African American teens. A video (seen to the right) has surfaced of the man after he had been beaten lying on the ground as a crowd mocks him.

When police tried to break up the disturbance they were assaulted. Jy Quinne Britten, 21, and Gary Sheffield, 29, were both arrested for their involvement in the assault on police. Eventually police are able to form a protective circle around the man whom is later taken to the hospital for treatment. 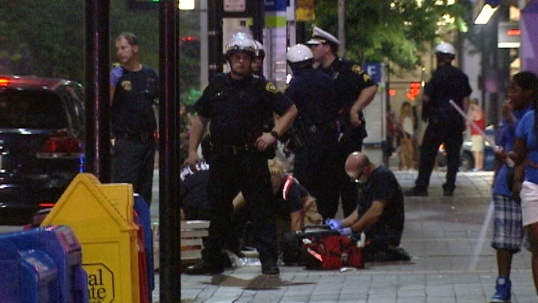 The second video shows the police arriving at what we believe to be the area where the assault occurred. You can see an unidentified person standing over a person laying on the ground. Another unidentified male walks towards the assault victim, puts his hands up in the air, and then runs when police arrive.

Quote by a responding Police Officer

So after my 4th of July night from hell I thought I would post the truth as to what went on last night in Downtown Cincinnati. Many news outlets although they were there will fail to report…The Truth. The truth is I’m sitting in the district catching up on reports when an officer needs assistance comes out over the radio on Fountain Square. My partner and I scream down there to help out. I get down there to see glass bottles flying everywhere from a mob of out of control misguided youths. Okay that was a nice way of saying a bunch of thug idiots. They thought it would be appropriate to throw these bottles at police officers. While dodging these bottles I found one officer that was actually punched in the face by one of these assholes. Luckily he was apprehended. This was just getting started.

We were trying to keep everyone under control and push everyone into one area to get them off of Fountain Square. So then is when the crowd got even further crazy, they began throwing large fireworks at us. While trying to figure out if fireworks or gunshots, usually you could tell, but we weren’t taking any chances. I look down 5th st to see a few of my brothers and sisters trying to apprehend an individual and begin chasing him. I immediately give chase and even though I’m getting a little older still catch the guy and he gets the 5 second taser ride. This seems easy enough right…well now we’ve got the whole crowd bearing down on us all with their phones out video taping…or throwing stuff at us. (Later found out that this guy also punched a police officer in the face)

We get this guy in custody, and it’s the second year in a row I have a tasing in this area on July 4th…guess it’s just not my day. So then we form into riot formation with helmets on and begin passing out the shields. Honestly this was the first time I got to partake in this. So we see ahead a scuffle begin and think it’s just a fight. Well not so much, it was like 40 v. 1. I saw 40 v. 1, it was 40 black youths stomping the crap out of one unlucky male white. He didn’t do anything to deserve this beating except be white. I’m going to skip all the rhetoric and just say don’t we all matter??? This just pissed us all off. Time to rescue or at least try to get these thugs off of him. So we were sent in with shields and arrest team to do a victim rescue. Feel bad for the guy since he nor anyone deserved a beat down like that for no reason. The next hour or so was just getting these assholes out of the area and back to where they came from. I hope every one of the people who threw a bottle, fired a handgun, threw fireworks at us, and most importantly beat that poor guy within inches of his life get what they deserve…in this life or the next.

To make matters worse it was like a perfect storm with the Reds game getting let out at the same time we were for a lack of a better phrase, being attacked. I saw little kids holding their parents hands and parents looking at us like what the hell is going on? They had no clue what was going down nor should they have to expect seeing what they saw.

I felt like I had to tell the truth and get the word out there from one of the men on the front line. We as an American Society and Cincinnatians need to get our shit together because these types of interactions are going to increase. I say it again, this stuff is increasing not only here at home but across the country. We need to come together and fight back.

What do the videos prove?

The victim is also assisted by African Americans. An Unidentified African American male also pushes two “instigators” away and then appears to effectively disperse the mob. This would imply that while the attack may of been racially motivated not everyone there felt the same way.

It is also important to mention that the person that uploaded this video, QbabyOfTeamQ, apparently has been sent racist messages and threatened.   Before you consider doing such a thing you should consider the fact that he believed that this was “going to far” and apparently uploaded the video to raise awareness. If you reward him with racism you might encourage him to just look the other way or press the delete button the next time he witnesses this.

Pictures of the Incident 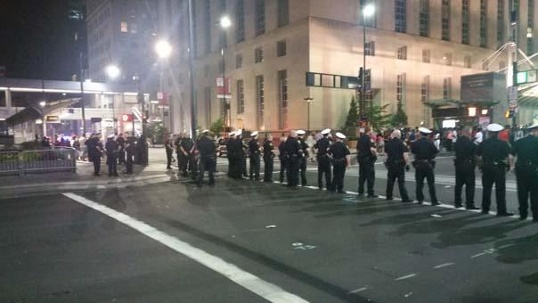 Video from wlwt News who at the time did not provide a way to embed. Under fair use we are allowed to share this video for the purpose of news and commentary.

anyone remember what happened in L.A.,after the Rodney king incident? the white man that was dragged from his dump truck,and head smashed in with a brick?the USA does not need more prison’s,it need’s to come down real hard on these thugs and quit pussy footing around.

It’s amazing how little attention this article got. No really big press covered it and it just kind of vanished. We tag stories like this, the tag in this is racism. In the future other readers will see the racism tag and click it and it’ll take them to a page full of related stories. http://www.illwriteit.com/tag/racism/