A Clayton County Georgia woman who goes by “Eye Empress Sekhmet” is now being investigated by local police for threats against police and whites.  You may remember her from the video we’ve posted below.   Eye Empress Sekhmet uploaded this video to Youtube recently and then deleted it shortly after.   In the video she holds what appears to be a machete and a pistol pointed at the camera while she declares it’s “open season a mother F***ing cracka”.

According to Wsb TV2 Police say the woman who made the internet threats lives a mile and a half from a Clayton County police station. The F.B.I. is also investigating this threat. Wsb TV2 claims the police informed them that they are considering charges.

If you are local to the Georgia area you can hear from the detectives investigating this on their live report on Channel 2. As we receive updates we will post them to this page. 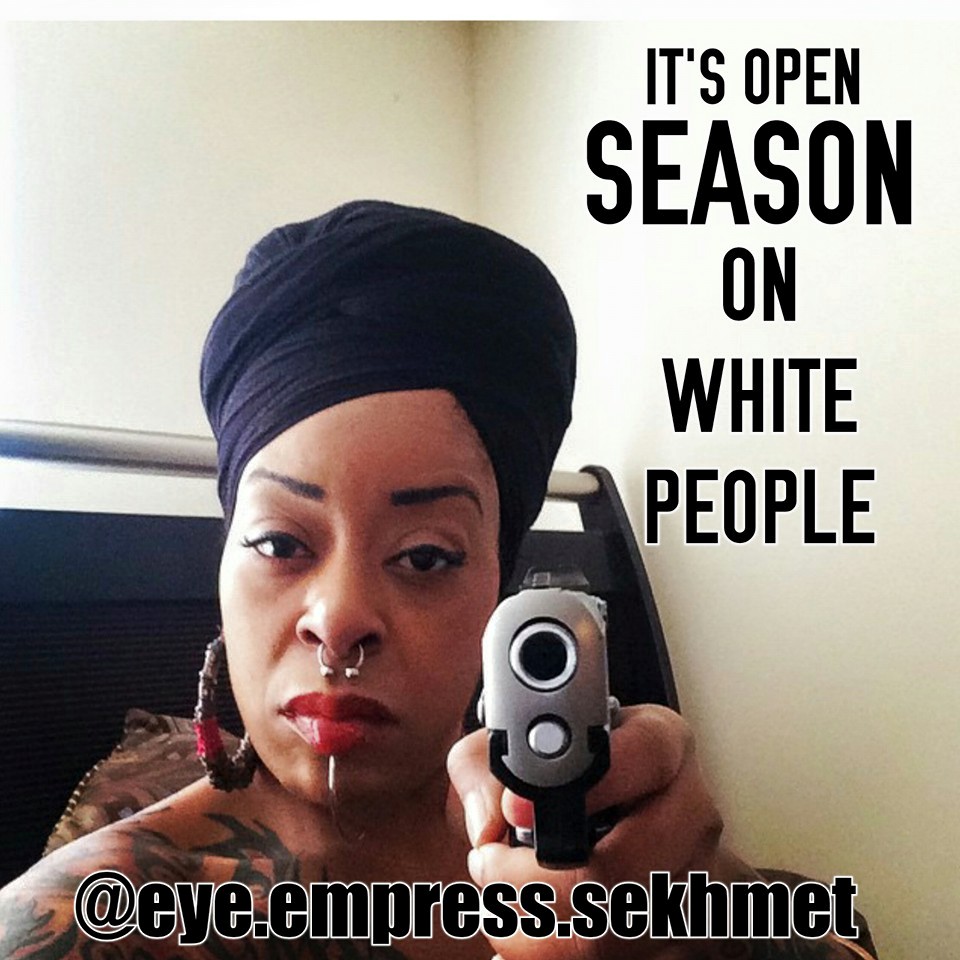 Congrats to #NOTHIEFSALLOWED for their excellent work 🙂 Not so tough when the FBI showed up.

what is going on(again) I do have an account set up on your illwriteit site,and have logged in,but I must post as a guest and enter a code? this has occurred one other time.i also noticed that you are no longer on twitter?

If you’re on a phone and the arrest video doesn’t show up we self hosted it here http://www.facebookrejects.com/m/videos/view/Eye-Empress-Sekhmet-FYF911-arrested-by-FBI-not-so-tough-now-are-you

VERY CONSIDERATE OF ALL THESE NICE FOLKS TO ANNOUNCE THEMSELVES PUBLICLY. TOO STUPID TO STAY ALIVE.

Hahahahahqhhqhqhqhhqhqhhahahaaahahahahah not so tough are you now… hahaha enjoy your free meals in jail you disgusting racist slug!

Here’s my address..come and get you some of this white boy! 2022 pioneer parkway Arlington, Texas. I’ll be waiting to take the trash out.

I hope they string that animal up by its neck and choke the last bit of oxygen from its worthless lungs.

really do like to see that at least one (the Viking hanible) has the balls to do what the damn liberal so-called law enforcement will not do,i only hope that in the near future that I will be able to donate some money for the cause,keep up the great work,God Bless you all !

Someone should arrest that video guy, too, for some of the worst camera work ever. Shesh.

🙂 You are right about that, I have the 6 hour long video of their little online show and at several points in time they loose audio, can’t talk right, and have all sorts of other technical difficulties they are terrible at it.

And people like this is why i consider #blacklivesmatter a joke, all i hear from them makes it seems like the black version of the KKK, just not to the extent the KKK had been in the past (if theres people like this though, im scared they will get to that point)

Any new news on this case? She is raising trouble currently in Clayton County, why do they have this monkey running loose?