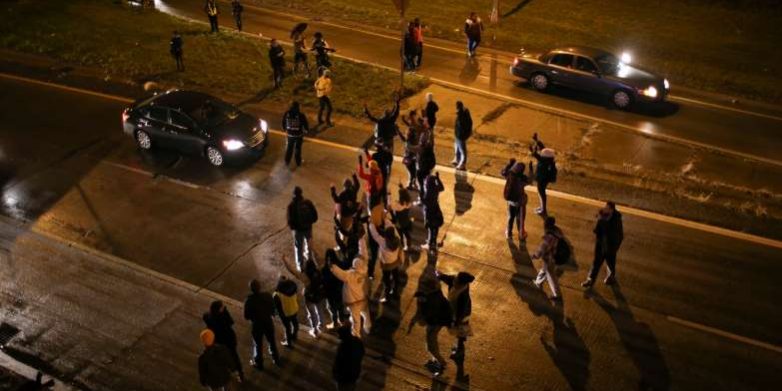 A group of 42 #blacklivesmatter protesters were arrested Monday for blocking traffic in Minneapolis Minnesota according to an article by the Associated Press. They were protesting the next case of a (Insert any race here) police officer shooting an unarmed black man that we’ll hear about for the next 2 months on the media.

This time the protesting is over the shooting of Jamar ONeal Clark, 24. Police claim they were called over an alleged assault. When they arrived at the scene Clark was interfering with a paramedic. Police shot Clark, who later died in the hospital.

Pay careful attention to one thing released in today’s report:

Evans declined to release any identifying information about the officers, including their race, pending interviews with them in the next day or two.

Black lives matter is a movement known for protesting against racism, so what exactly are they protesting about if they don’t know the race of the police officers. Would they still protest if it came out tomorrow that both police officers involved in this case were African American? It’s not likely, it’s more possible that one may of been, but without knowing for sure, what are you out there doing raising the taxes in your local municipality?

How much do you think it costs to have as many police as you see in the above picture respond to a bunch of people throwing a temper tantrum in the middle of a public highway? I think the perfect solution to these issues is laying a civil judgement against those arrested so that they all have to pay their share of the cost of the incident.

Why should the tax payer have to pay for these temper tantrums?

What the hell is wrong with these people? Thinking that they have the right to put everybody else’s lives on hold because another black life was lost. But they don’t seem to have an issue with all the other black w
lives being lost unless there is a media frenzy watching them or until they are causing one.