It could be the most ridiculous claim of racism I’ve heard in 2015.   Muslim commedian Guzzy Bear AKA Mobeen took to twitter to call for a boycott of the movie Jurassic Park because he claims it contains racial slurs.

Apparently the issue is over the Pachycephalosaurus dinosaur. At 4 points in the movie, the actors refer to the dinosaurs by Pachys.

“The Pachys are out of containment!”

The Muslim comedian then turned this into Paki, as “Pakis” is apparently an ethnic slur in the UK.   Apparently the comedian failed to realize the abbreviation would be pachy and not Paki, but that didn’t start him from pulling the race card. 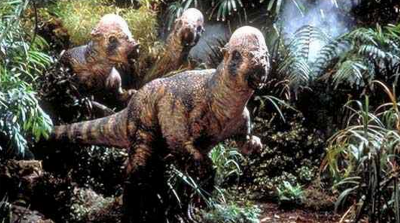 Was the Comedian Joking?

The Commedian could of been joking, but as you can see from the above tweets, some Muslims took it seriously and took to twitter to express their outrage over the issue.

People need to understand, this movie was produced by Americans.   People can’t research cultures all over the world before producing a movie to determine “Hey that abbreviation might be offensive in this country” before producing a movie.   Anyone that thinks that the movie intentionally put that abbreviation in it to be racist against people from Pakistan is ridiculous.

how can that be racist? Pakistani is a nationality, not a race.

The “race card” is overused these days like in this case.