Nocturnus Libertus recently posted a video contained what appears to be a hate crime attack against an unidentified male. The video was uploaded by a company named OLMECIAN CLOTHING onto vine. A quick review of the profile revealed an additional part of the video as well as other incidents involving flags.

Bragging about violence against protestors

moor__goddess uploaded the video as well as a picture on instagram bragging about the assault. We wonder if the man seen in the first picture is also the same man being assaulted in the video. 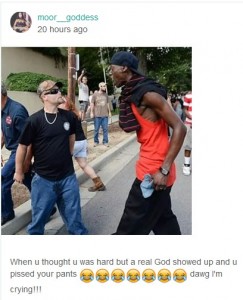 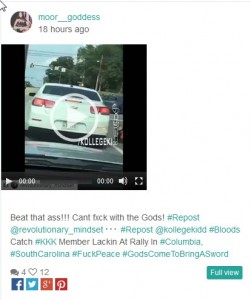 How do we know he's in the KKK?

NBC News recently did a segment on what appears to be a story about the same incident.  It occurred in Columbia South Carolina.   It happened at a protest involving the KKK and the Black Panthers.   The report also claims that the KKK is a very weak group with only 2000 members nationwide.   That means, based on the video evidence, the chance of this guy being involved in the KKK is about 1 in 1,595,000.  Say that he is, does that make all hate groups including the black panthers fair game?