Rowlett Texas:   A group of African American females attacked a 14 year old white female while she still held her 3 year old niece in her arms in a recent black on white hate crime.    The black teens can be seen yelling at the white female for a few moment before a black female sneaks up beside the teen and throws her on the ground.   The 3 year old hits the pavement hard screaming while African American males stand around laughing, dancing, and recording it on their cell phone camera. 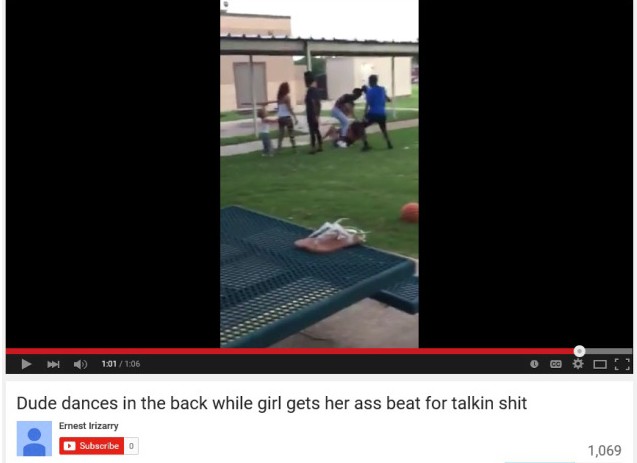 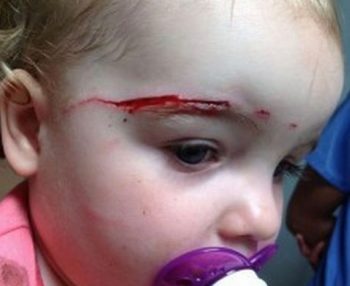 The infant girl suffered a head injury from hitting the sidewalk.    I’m honestly surprised that not a single African American in this video had the decency to stop the attack.  One of the African American Males can be seen later in the video running over and dancing in front of the mother as she’s being beat while the 3 year old screams.    Obviously racism plays a factor here as you’d have to have absolutely no sympathy for a race to allow a 3 year old child to lay on the ground bleeding and screaming while you record the hate crime rather than helping the child.

Even though the Police haven’t arrested a suspect when this video was released, and have absolutely no idea who it is, and despite the fact that it was black females vs one white girl, they already are claiming it’s not a racist attack. They also claim the girl attacked is bi-racial. Funny how that works, Obama is half black / half white but is referred to as the first black president, yet when a white teen is assaulted by black teens she is “bi-racial” and not white. Not to mention the child looks pretty white to me.

It’s also ironic how a few weeks ago when a similar incident happened between officer casebolt and an African American teen, it was declared racist in the first 30 minutes, yet here we have a similar incident with injuries to a 3 year old, and within 5 minutes, due to the fact that the attackers are black, it’s instantly labeled as non racist. Funny how American racial hypocrisy works isn’t it?

Oh and by the way, here’s the facebook page of the African American male that sat around recording it on his phone while laughing.   His name is Ernest Irizarry Jr., I’d honestly like to know who his parents are so that I could tell them what colossal failures they are.

We can’t verify the validity of this but another website has reported that this was what a witness had to say, the black attacker was “looking for crakka’s to beat up”. Again, we can’t verify if this is true or not.

Your right it’s never racial when the roles are reversed. What a corward the young punk is filming.

Youtube removed the video, we’ll be hosting it here now 🙂

Never mind I found another youtube video, but in the event they are all taken offline we have the video backed up on this website.

Updating the situation, it would appear that the guy film taping the video, his profile link is https://www.facebook.com/profile.php?id=100001744024538 has deactivated his account from backlash more than likely, can anyone confirm that?

Further update, youtube appears to be banning anyone who uploads the video, a live leak account was banned last. From this point forward we are self hosting this video rather than linking to youtube videos. This allows us to provide a permanent link to it that people do not have to worry about disappearing. We apologize if any of you have tried to view the video on this page only to find out that the youtube account was deleted.

Lock their sorry asses away. They just blew their whole futures to smithereens. I believe in redemption, but they’ll be dealing with the consequences of their ignorant stupidity for a very long time.

Well, “smithereens” is le mot juste (the perfect word), seeing as how the attackers are the Smith sisters. The younger one who actually attacked the sitting victim is Shanice Smith, 13 or 14. The older one is her sister, 17 yr. old Esther Nicole Smith.

I’m shocked this hasn’t gotten National news coverage. The media is so scared of blacks. I think it’s time for a change.

I agree with you, it seems that nobody in the media wants to touch it. If you are concerned about “White rights” now would be the time to have that conversation rather than 100 years from now when we are a minority. Could you imagine how white people would be treated then since everything is our fault now?

why has white america not hired a attorney and sued goverment for ignoring and refusing to arrest blacks committing race crimes against us all over the country every day. File suits for whites in every state in state , and I mean all whites ,people will have to acknowledge series problem and goverment will have to act

This administration will not do anything it doesn’t want to do. They disobey judicial orders, they disobey standing statutory law, and they disobey the constitution.

And no one will make them do it. Who ya’ gonna call? The congressional Republicans?

That is not a photo of the baby that Rowlett girl who was attacked by the two black sisters was holding. The baby in the photo is Georgie Gittus. She lives in the UK and was attacked by a cat: http://www.thesun.co.uk/sol/homepage/news/4507250/Cat-attacks-baby-girl-in-cot-leaving-her-needing-17-stitches.html

I just thought you would want to know.

I can only hope and pray that i’am never a witness to such,as I will NOT stand by,could illwrite post my bail/bond?LMAO ! but I truly do mean what I have just posted,hopefully the baby will not suffer any long term damage to the head from this savage f’ing gar.all hard working,tax paying,GOD fearing American’s need to be aware at all times,as this could happen to anyone at any time.