The Story we're being told

A video surfaced of what appeared to be a McKinney Police Officer using excessive force against a 14 year old African American Girl. Before any evidence was released, sites like Media Takeout posted propaganda while CNN used misleading titles to stir up the racial debate. This is what makes them money.

Scroll to bottom of article for ratings explanation.

The incident took place at a private community pool

The pool that this incident occurred at is not open to the public. It is a private pool for the members of the Craig Ranch Community.

The pool has very strict rules.   You need a photo ID to get into the pool and Pool parties cost $225 and are limited to 20 people. 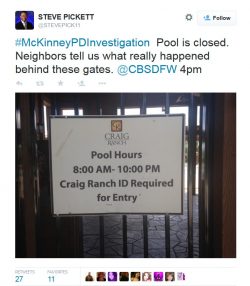 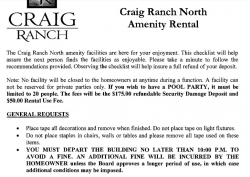 Tatiana Rhodes and Lashana Burkes have setup several events before.  At this event they specifically promoted it as a pool party.  The intent was promoting a future event that they were selling presale tickets for $5.00 each.   Neither of these two people had the right nor permission to do this. 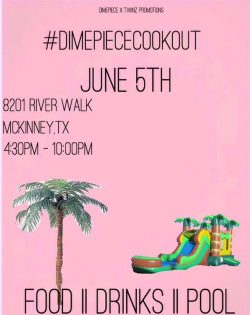 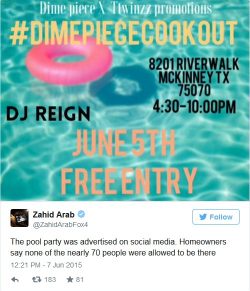 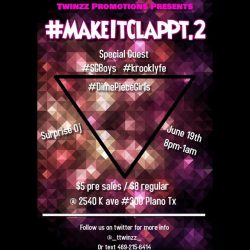 A group of approximately 70-100 people show up in a public place next to the pool.  The event was promoted as a pool party, and the people that came were expecting this.   You can verify this in the future videos, notice how everyone has pool attire on?

At some point in time, it is unknown what sparked it, people from this group began jumping the fence to get into the private pool that requires a photo ID to access.   The security guards tried to remove them but they refused to leave.  Residents claim that security guards were assaulted, and that community minors (teens) received minor injuries.

You also have this video of one of the organizers fighting with a community resident.   I can imagine under the circumstances with all the chaos going on she would be upset because her event promotion is ruined at this point.

A resident also complained about loud music with explicit lyrics and drug and alcohol use around children. Most residents, of all races, say the same general story.  A group of “punks” ruined it for everyone. 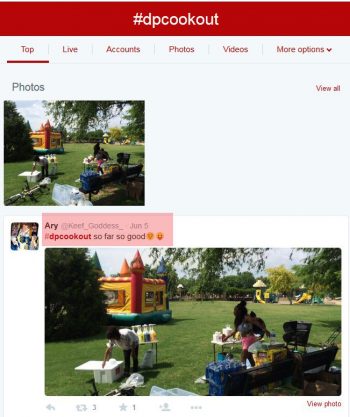 Brags about the above attack on social media:

With The Situation Already Out of Hand, Officer Eric Casebolt Arrives

With  multiple fights breaking out and two security guards already assaulted, officer Casebolt arrives.   I believe that 9 additional police had to come to control this incident.

Facts gathered from the video to the right:

This is a tragic situation that was incited by a poorly organized event by Tatiana Rhodes and Lashana Burkes. If we are supposed to be responsible for our actions, these two should take responsibility for this entire incident.

With that being said, a majority of the teens that came to this event were expecting it to be a pool party due to the type of event Lashana and Tatiana promoted. If you watch the videos you’ll notice a majority of the teens are in pool attire. It is safe to say some of them more than likely became enraged when they learned the pool was private and that they couldn’t use it.

It was at this time that some of them began jumping the fence. When security guards tried to take control of the situation it was reported that two of them were assaulted as well as a mother of 3 by the person organizing this event. Tatiana Rhodes later bragged about this on social media. Residents of all races claim that a bunch of “punks” spoiled it, this would imply that a smaller group of people were instigating this entire incident, and you can’t judge the actions of the entire group by the actions of a few, as also in the video you can see some of the teens being polite by returning the flashlight to the officer.

Officer Casebolt arrived at an extremely chaotic scene. I believe that 9 police total were called in as backup to stop the incident. This was certainly no pool party when he arrived. With this being said, we still have issues with the foul language used at the teens sitting on the ground and can not see how this will diffuse any situation.  Parts of the video where he is detaining the child are also hard to watch, and the case could be made for excessive force.   This however seems to be a reaction to frustration, and as a result anger, and not racism.

There is absolutely no case that can be made for the #blacklivesmatter movement here. The reason African Americans were targeted is because of who Tatiana Rhodes and Lashana Burkes targeted when promoting this event. The crowd they promoted to was primarily African American. They also lied to these people, claiming it was a pool party when previous documentation proves they had no permission or right to do this.

Regardless of who is upset at who, the people in the community should not be getting attacked like they are.   We all have our opinions on this incident but we shouldn’t be threatening people because of what side they are on. This community is racially diverse, there is no case that can be made that the people were upset because a bunch of “black people” showed up. African American men and women swim in this pool regularly, since they live in the community itself. The whole person that incited this incident was African American, and lives in this community after all.

This is one incident where we disagree with person(s) claiming to be with Anonymous who doxed the person who was pictured holding a sign showing support for the police. We understand that the actions of a few within this group do not represent the beliefs of the entire group, so our disagreement is with the person(s) that did this to the resident. Children have had to move out of their houses and lives have been forever changed, if anyone should of been doxed, it should of been the people that incited this entire incident, not that we support that type of activity.

Other Points to be Made

Peoples lives will ultimately be changed forever due to this iincident, which was caused  by people looking to incite something via social media.   The teenage girl may never fully trust police again, Officer Casebolt who I’m sure doesn’t get credit for thegood he’s done, might be fired or punished for this incident.   A community has to live in fear from constant death threats if they are caught saying anything good about the police, while the people who caused the entire issue sit back and laugh about it.

The US Media makes millions feeding both sides partial truths, sparking the great debate, causing their articles to go viral, making thousands off all the advertising they shove down peoples throats.

Something that is often overlooked with this entire situation is the fact that several teens picked up an officers flashlight that he dropped and then returned it to the officer.   One officer thanked them, and then Officer Casebolt put them on the ground, accused them of running, and then swore at them.   To us, this is an unacceptable way to talk to teens. 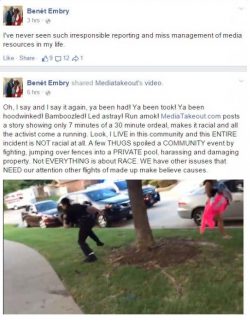 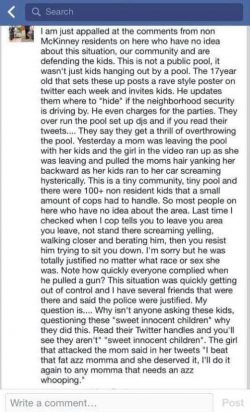 It should also be mentioned that since this incident there have been several complaints of vandalism in the community where this took place.  Some have even moved out of the community due to death threats.   They are victims of the “US Media” that seeks to incite situations like these as that’s what makes them the most money. 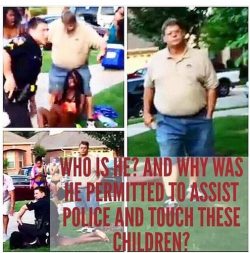 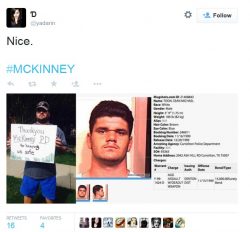 As reported by Heavy.com, Office Casebolt was sued in 2008 for Racial Descrimination:

“Federal court documents show that David Eric Casebolt and other officers were sued in 2008 in federal court for racial profiling, harassment, failure to render aid and sexual assault.

The handwritten lawsuit was filed by Albert E. Brown Jr., who was being held in jail on pending charges related to the traffic stop at the time.

Brown accused Casebolt of reaching into his “private area” and pulling his pants “down below ankles” during the traffic stop.

Brown was parked on the wrong side of a road in McKinney, according to the civil complaint. Casebolt told Brown he was going to write him a ticket for the traffic offense, but then said he saw two marijuana seeds and an open container in the car.

Brown said Casebolt also remarked about the “white girls” who were with him and made comments about him and his clothes.”

The Good: The Conservative treehouse did some amazing journalistic research with their article on this incident. Heavey.com also did great investigate work but didn’t provide as many details as the Conservative Treehouse. Fox and NBC provided articles on this that didn’t go that far out of their way to incite bias.

The Bad: The Daily Kos provided some of the most shoddy rag journalism we’ve seen in a long time. They clearly try to incite racism into the situation, claiming that because a mother defended a child that there is reason to believe she might of discriminated against African Americans at her job. You can’t even comment about this on their site unless you pay for a subscription which sounds pretty elitist to me, obviously they don’t care about anyone’s opinion who can’t afford their subscription fee. Media Takeout was the first to report this was due to people “not wanting black people” in their pool which simply wasn’t true. CNN used misleading article titles to slightly influence bias against the police.

The Daily Kos intentionally leaves out crucial information, such as the fact that in the pool fight the attacker bragged about “beating that ass” on twitter after   They implied that the woman trying to stop the fight and protect her daughter was racist instead. 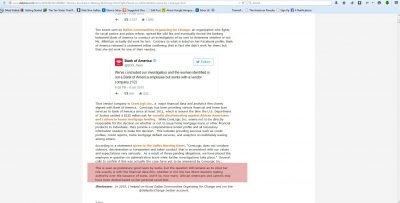 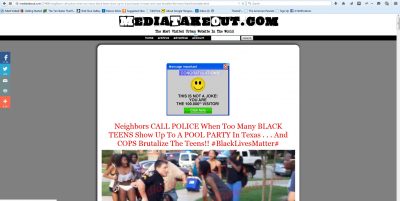 First of all, many people commented about the professionalism of the other officers. Second white witnesses mentioned the different treatment by Officer Casebolt. Third, he did not hit, yell, or slam the white teen who was put in handcuffs. She went to tell him how the fight started, he asked if she was involved. After she said yes, he asked another officer to put her in handcuffs, yet he slammed multiple black kids by their heads and necks to the ground while cursing at them. He was hateful even when the two young black boys were addressing him as Sir. He is a poor excuse of an adult and as a vet myself, I find his mistreatment of kids inexcusable!

I am curious if anyone apologized to Tracy Allbritton? I have watched the video multiple times and i never heard her say anything racial. Dallas Community for Change suggested people call her employer to have her fired.